You are here: Home > Sculptures and Reliefs

In Admont Abbey Library, there are 16 sculptures and two large reliefs by Josef Stammel (1695–1765). 60 of the 68 corbel busts with scholars, artists, poets, sculptors and sibyls on the bookcases were probably created by him. Stammel's service to Admont Abbey lasted for more than four decades. He was a contemporary of Georg Raphael Donners and Bartolomeo Altomontes. Thus, he belonged to a generation of artists who led on the late Baroque period to a final climax. His works are connected to the remaining design of Admont Abbey Library's hall, which is influenced by the spirit of the Enlightenment period. Josef Stammel's carvings are made of lime wood. With the exception of the gold-plated busts, they are bronzed, therefore creating a material illusion.

On the two narrow sides of the library hall, there are two large reliefs at gallery height. The relief on the south side depicts a well-known motif from the Old Testament: The ‘Judgement of Solomon’ as the epitome of human wisdom. Jesus, who teaches in the temple, is portrayed as the New Testament counterpart and symbolisation of divine wisdom on the north side. Evangelist Luke and the relief ‘Jesus Teaching in the Temple’The almost fully plastic high reliefs in the medallion-like painted frames at gallery height in the two outer halls depict a total of eight biblical figures: On the south side are representatives of the Old Testament, namely Moses and Elijah, opposite them the apostles Peter and Paul, and on the north side the four evangelists Luke, John, Matthew and Mark.

On the upper floor of the central area, the personalised representations of the four virtues in the figures of women convey a thematic dialogue: Eternal truth (‘veritas eterna’), divine wisdom (‘sapientia divina’), prudence (‘prudentia’) and science (‘scientia’).

Also under the central dome is Josef Stammel's group of figures ‘The Four Last Things’, circa 1755–60. The four larger-than-life figures are characterised by distinctive gestures and facial expressions. They represent death, resurrection (at the same time judgement), hell and heaven. They contain a central eschatological theme of the Baroque period. The human wanderer must face up to the last things in the face of his death. In the course of God's judgement, the decision as to whether heavenly glory or damnation in hell awaits him will be taken later. The four sculptures have been facing each other in the central area between columns and bookcases since about 1800. However, the original intention was for them not to be placed here. Instead, the ‘Universe’ stood at the centre of the Library before it was destroyed by the Abbey fire. 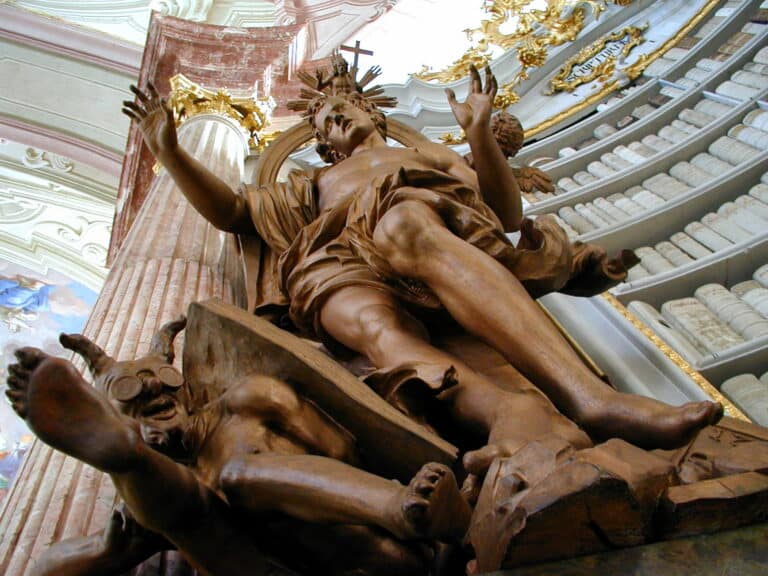 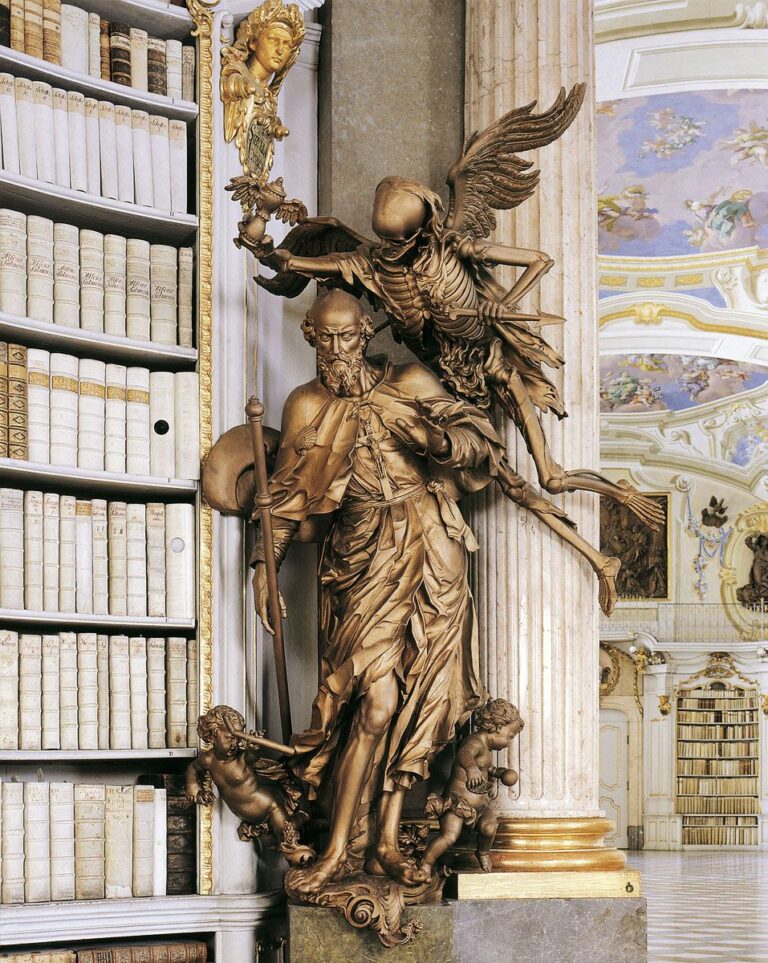 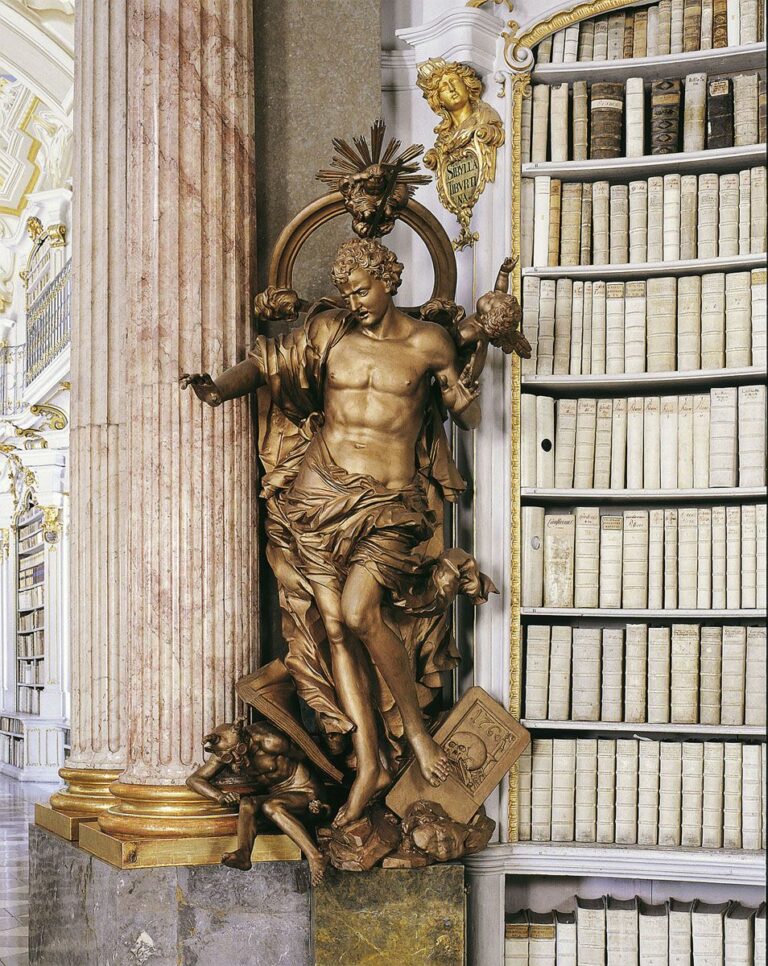 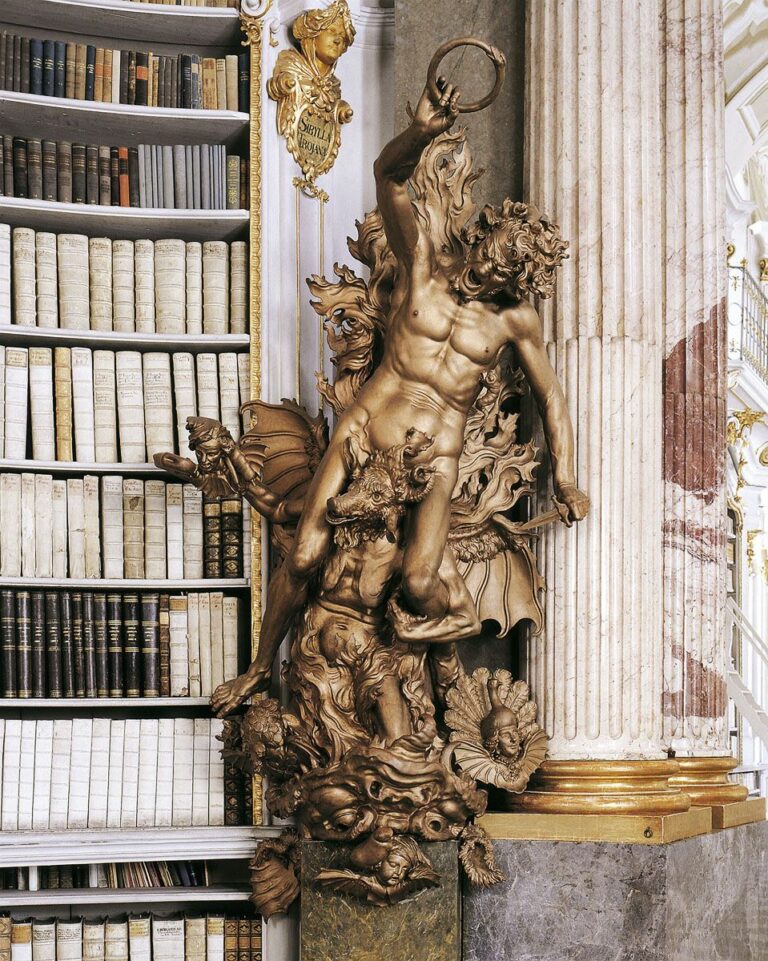 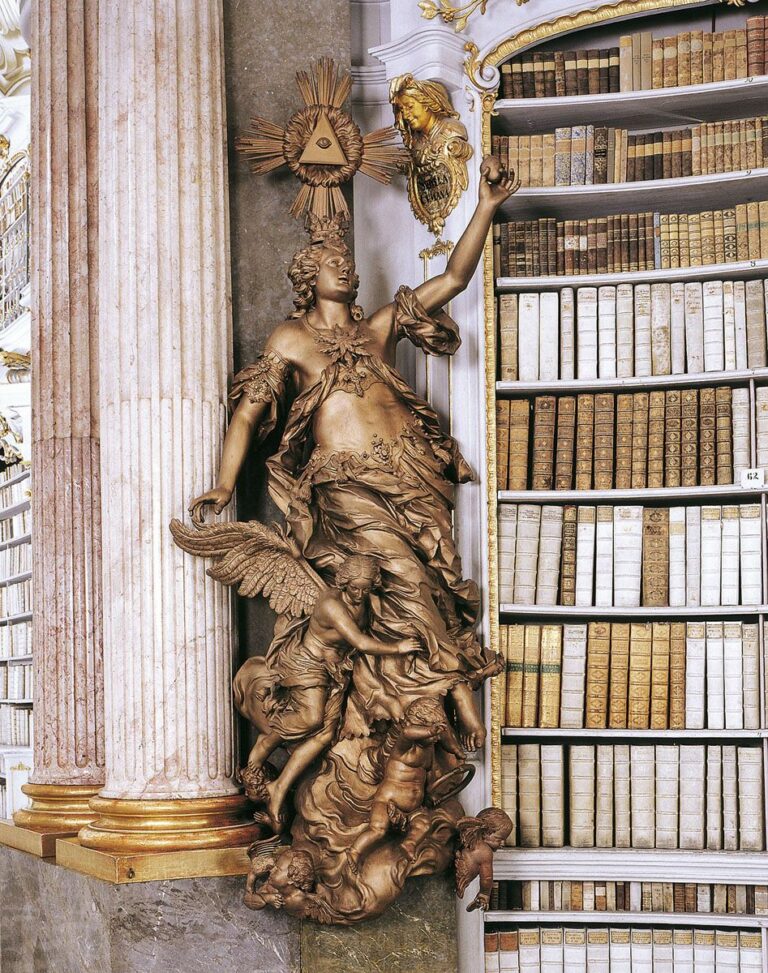